Samphire Found along coastlines of the UK and northern France near estuaries and rocky pools as well as marshland, Samphire has small green branches with tips - like a small salty asparagus, and is indeed often known as sea asparagus. Blanching or steaming removes some of the salty flavour. Fresh is best between May and September, after which it can be too woody. It is also pickled, which is available year round. Seaweed Seaweed is among the richest sources of vitamins on earth and retains a concentration of minerals, fibres and proteins. It is especially suited to accompany fish or shellfish and is very easy to use. Simply rinse 2/3 times in fresh, cold water and then soak for 5 minutes. There are about five and a half thousand species of Seaweed but here are the more popular types of edible Seaweed (all farmed in England, Ireland and France) most suited to cooking, classified in 3 colour categories - Brown, Red and Green. Brown (becomes green after cooking) Kombu - Also known as Neptune’s Belt or Kelp, Kombu is delicious in soups and its wide strands make it ideal for making papillotes and wrapping whole fish with to bring out some extra flavour. Wakame - Has an almost oyster flavour, suited to soups and salads and is the best-suited seaweed for serving as a vegetable dish. Used in Japanese miso soup. Sea Spaghetti - This long, almost flat, spaghetti-like seaweed is also known as ‘sea thong’! Pan-fried for a few minutes with garlic, salt and pepper, Sea Spaghetti makes a great accompaniment to a portion of fish and is great with scallops. Use like a green bean, they are ideal for mixing into pasta and salads. Red Dulse - Has a slightly crunchy, nutty taste and is very popular in Ireland, where it is called Dillisk. It can be served raw with a normal salad, added to a stir-fry, or used to enhance the flavours of a fish pie. Carrageen - Often called Irish Moss, Carrageen is very common around the European and American coastline. The colour is rich, dark red but, once dried in the open air, it bleaches to a creamy colour. Carrageen is well known for its gelling qualities, and is often used in place of gelatine in sorbets, ice cream, chocolate, cheese and instant soups. Nori - Also known as laver or purple laver, Nori belongs to the red seaweed family, but becomes black or green when dry. Dried and pressed, Nori is widely used by the Japanese in sushi, and of course it’s also used in the famous Welsh laver bread. Green Sea Lettuce - The most popular seaweed, sometimes known as green laver, it has a taste almost like sorrel, and is delicious in a salad or soup. Like Kombu, the wide leaf shape is good for wrapping round a portion of fish and gently steaming. You can deep-fry it too for some real crispy seaweed. 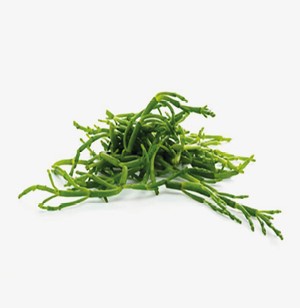