The word Caviar is synonymous with luxury and opulence. While Sturgeon are being farmed in France and America, it’s the fish from the Caspian Sea which are prized. The three main species of Sturgeon are Beluga (large grey-blue eggs, considered the best) Oscietra (gold and pale brown eggs) and Sevruga (smaller than Beluga, intensely dark with a strong taste). While only roe from Sturgeon should be called Caviar, other species can also be used in similar ways. The best alternatives for taste, texture and appearance are Sea Relish (made from seaweed) and Avruga (made from Herring). They are a fraction of the price of Caviar, a great ingredient for sauces, garnishes, blinis, canaps, sushi and pasta dishes, their colour doesnt run and theyre far better than Lumpfish Roe. Keta (Salmon Roe) is much larger, has a translucent orange colour, and literally bursts in the mouth with a unique flavour. It’s widely used in Japanese cuisine, especially for sushi where it is called Ikura. Botargo (Grey Mullet Roe) is popular in Greece and like Cod Roe, is used in taramasalata. Squid and Cuttlefish Ink is useful too - widely used in making pasta and risotto, it gives a rich dark colour and a delicious ‘seafood’ taste. 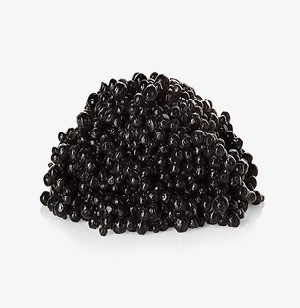