Every menu should have fresh Tuna! With its firm, rich red meat, you could almost describe this as the ‘cow of the sea’ and like steak, is best seared on the outside, rare in the centre. While available year round, Tuna can be harder to source in the summer, when the fish follow the monsoon season around the Pacific. It can be flash grilled, griddled or pan-fried but avoid baking as it will dry out. Tuna has agreat flavour which stands on its own or try any Mediterranean flavours, spices, chillies, Oriental flavours - just avoid creamy sauces as it’s an oily fish. Tuna should be kept below 4°C until cooking, to avoid histamines developing. The most common grades, starting with the best: Yellowfin (Thunnus albacares) A browner, less rich colour, and a great eat. The most common Tuna available in the UK (also available super frozen for Sushi). Albacore / Long-fin / White Tuna (Thunnus alalunga) A lighter flesh similar to chicken. Good for a salad Nioise. Bigeye (Thunnus obesus) Skipjack (Euthynnus pelamis) Used for canning. 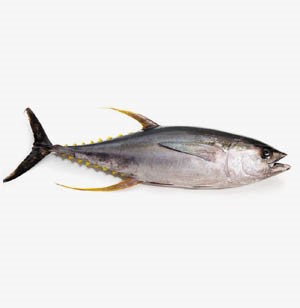