Like Sea Breams, there are many different Emperors. They look a lot like Snappers, and are closely related, the difference being Emperors are species from the family Lethrinidae and Snappers are from the family Lutjanidae. Just to further confuse, there is a fish called Emperor Snapper! (It’s a Lutjanidae). Ranging from 300g to 1kg, varieties of Emperor include: Longnose, Snubnose, Spangled (also known as Capitaine or Blue Emperor), and Yellowtail. When it comes to the flesh and cooking, while Emperor doesn’t have quite as strong a flavour as Snappers, it can be cooked in the same way. 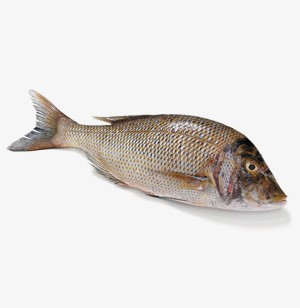