Similar to a large wild Sea Bass, and also known as Giant Sea Perch, though Barramundi has darker markings, and heavier scales. It’s a highly prized fish, especially in Australia, where wild fish range from 2-8kg commercially, but can grow up to 55kg. Barramundi is now also successfully farmed, which has brought smaller, portion-sized fish onto the market. It has moist flesh with large flakes, and a sweet taste which, like Sea Bass, can stand on its own, as well as suiting most flavours and recipes. Cook using any method, though it’s not good for poaching. Popular in Australian fusion cuisine, where East meets West. 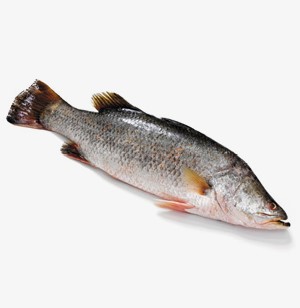