Also known as Ocean Perch (and incorrectly as Norwegian Haddock), there are species of this deep-sea fish found in both Atlantic and Pacific waters ranging from 500g to 2kg. As its name suggests, it has reddish-orange skin and is easily identified by its large ‘bug eyes’ and protruding lower jaw. Large quantities are landed, and are often used for processing into fish fingers. Fillets of Redfish have good flavour and a flaky texture. 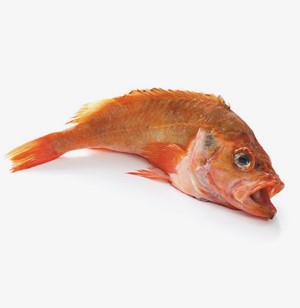