An ugly fish, which has a huge head, accounting for half the fish’s weight. However, there is inner beauty inside! Usually only the tails are sold, and range from 350g to 4kg. Once skinned, trimmed and the membrane removed (see below), the tails yield some fantastic meat, with a firm, meaty texture and a taste similar to langoustine / scampi. In the 70’s Monkfish was only fished commercially as a cheap scampi substitute! Great for searing and then roasting, Monkfish will take on strong flavours and herbs well. Particularly good coated with chopped rosemary and olive oil, wrapped in Parma ham and baked. The liver is also highly prized, and is a delicacy in Japan where it determines the price of the fish. Similar species known as ‘Stargazers’ are found in warmer waters around Australia and New Zealand but are a bony fish, not cartilaginous like the European Monkfish. 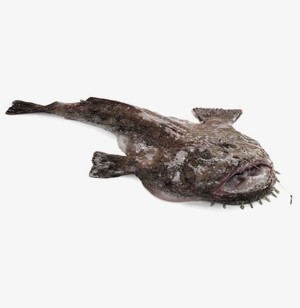