Often named St.Peter’s fish (St.Pierre in France, Janitore in Spain), as he is alleged to be the origin of the distinctive dark ‘thumbprint’ (or spot) on its side as a thank you for some help with his tax! The English name John Dory arrived from the French jaune dor meaning golden yellow - a good description for this unusual looking fish, which varies in size from smaller 230-450g fish up to 2kg. Because of the large head (like Monkfish, this accounts for half its weight), John Dory is best filleted, but beware the low yield (around 35%) and some sharp nasty spines, which require extra care when filleting. The flesh is creamy-white, with a dense texture similar to Dover Sole, which holds up well during cooking. Ideal pan-fried or grilled, John Dory works well with Mediterranean flavours, salsas, and peppery sauces. It may be an expensive fish with a low yield - but it’s worth it! 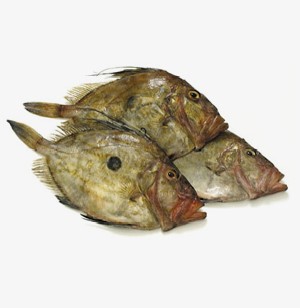