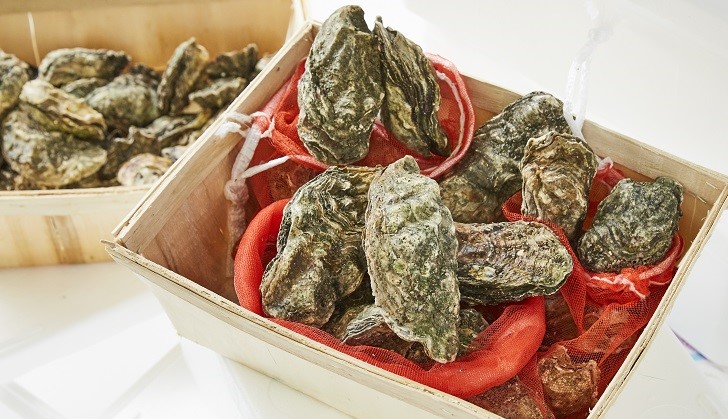 It used to be a poor mans food, the oyster. A meat substitute that bolstered Lancashire hotpots when times were tough. But the briny, meaty, mineral rich little nuggets became popular in high society, gracing ice-laden trays and served with an abundance of sparkling wine. All of a sudden the oyster had a whole heap of fancy new friends and became synonymous with white tablecloth restaurants and swanky receptions.

It’s a true rags to riches story that continues to baffle the uninitiated. But taking a closer look at the oyster can be quite revealing. Right now, we are in an era when humble workingman foods are being explored with much more interest than ever before. It’s the street corner foods of countries like Vietnam, Mexico and North America that are getting the most attention.

The po’boy sandwich is perhaps one of the best ways to explore cooked oysters. This sandwich that hails from New Orleans uses deep fried oysters – because seafood always tastes good deep-fried. It’s a gateway oyster vessel that even those who don't normally do oysters are happy to try. Deep-frying does something quite special to oysters though. Cooked at an incredibly high temperature for a short period of time, the oyster retains it’s juices and moisture within, but gains a crisp outer crust that gives it a beautiful contrast in textures.

Today, most people are still used to eating oysters raw, slugging them back in one fell swoop. A good oyster delivers an incredible oceanic flavour to the eater. Huge waves of crashing brininess and a refined, clean minerality. However, oysters purify the water they live in and due to certain waterborne bacteria, the oyster is a high-risk food that has been the culprit of Norovirus in some establishments.

Our Pyefleet Pure Oysters are purified differently, in a way that removes any Norovirus from the tissues of the oyster. The purification process is completely natural and doesn't use any chemicals or genetic modification.

In fact, each batch of Pyefleet Pure Oysters comes with a Certificate of Norovirus Analysis which provides restaurants and commercial kitchens with a defense against anyone becoming ill and blaming the oysters. Today, it’s a sensible and responsible sourcing choice that kitchens would do well to adopt.

Although oysters are no longer seen as a workingman’s staple, and don’t really get a look in on the old Lancashire hot pot, they’re also not always a high-ticket item. Knocking them out for a quid a go at events is not uncommon and can still give you great margins and after all, it’s a pretty easy dish to assemble. Other than some cut lemon wedges and a bottle of Tabasco these things can be washed down and partnered with IPA’s just as well as fancy wines. If you’re looking at dishes that are easy on the kitchen, and work across the full spectrum of low to high-end dining, then the humble oyster is your man.