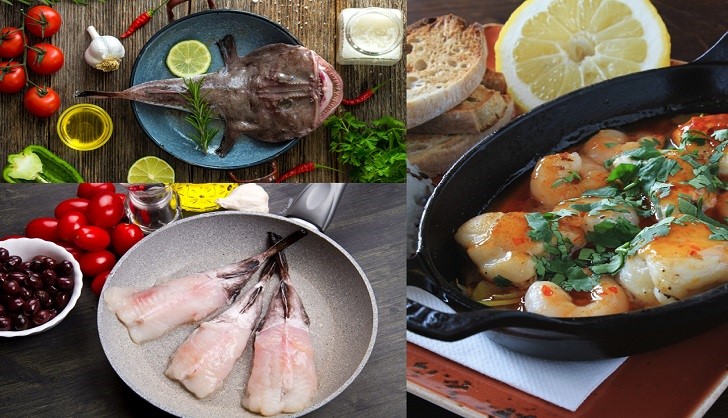 It may look like a sea monster, but monkfish is perhaps one of the tastiest fish in the sea, and one we handle in vast numbers. Yes, you lot love a bit of monkfish tail, but there are cuts of this great fish that aren’t seeing as much use as they should.

Cheeks of all fish get little use, which is a huge shame. These little muscles offer a huge payoff in texture and flavor, lending themselves to similar preparation and cooking as scallops. Cheeks are the fisherman’s choice for a fish pie, as it’s basically an offcut.

But monkfish is the pros choice, that tail holds some of the meatiest flesh in the sea. Filling, wholesome and powerfully flavoured. It’s got to be the absolute best piece of fish to use in a surf and turf platter, a style of dish that is on the watch list for 2017. Bacon is a great partner for monkfish, only outdone by a well-aged steak that carries plenty of rich flavoured fat.

With all the fuss that’s being made about healthy eating, trendy diets and clean eating, monkfish is perhaps your star ingredient. Perfect for those that want to eat well, but still feel full after dinner, because let’s face it, a salad just doesn't cut it, no matter how good your intentions are.

This fish can pretty much take whatever you throw at it and still stands up against a fierce amount of fresh chilli, spices and powerful ingredients like fish sauce and fermented bean pastes of south east Asian and Indian cooking. Where other fish flails and flounders, getting overpowered by the punchy, bold flavours, monkfish goes toe-to-toe, round-after-round and still blows you away.

This diverse ingredient is also harder to mess up when cooking, as I’m sure you already know. Whether it’s a Goan fish curry you’re bringing together, or a flash fried hunk that’s going to be perched on top of a bed of chargrilled seasonal veg, the margin for error is much bigger than if you were preparing a delicate fillet of sea bass.

If you have a whole monkfish tail, be sure to keep that tail bone and any trim. Roast and boil that beauty down to give you a punchy reduction capable of breathing life into even the most soulless of sauces, or limpest of broths.

So while the monkfish might not be the prettiest beast in the ocean, it’s by far one of the tastiest. As we enter these milder months, with the tease and promise of the warmer summer days ahead, monkfish tails can be a perfect ingredient to start pushing on your menus. Vibrant and fresh, but still meaty enough to leave diners satisfied. It might be a monster, but by heck it’s delicious.