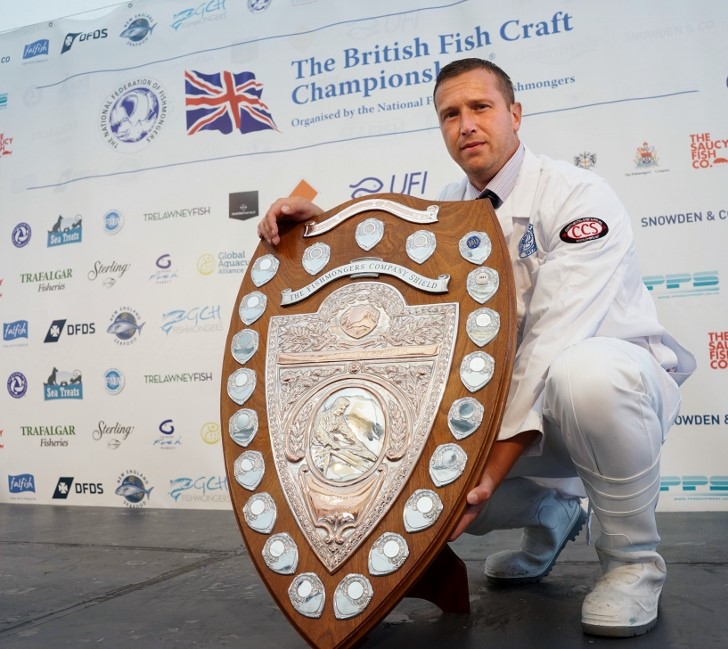 Paul Darling won the NFF British Fish Craft Championship in August and is officially recognised as the best fishmonger in the UK. The rest of the M&J Seafood team performed well with stellar results throughout, most notably a clean sweep in the salmon championship taking all places first to fourth.

It’s been two decades since Paul’s brother introduced him to fishmongery and he has become a filleting expert and seafood specialist in that time. He’s competed in the championships four times in previous years and this year nailed the coveted top prize. He puts his success down to remaining calm under pressure and calling on his years of experience in the heat of competition.

Paul’s top performance was in the salmon category. He used to work as a ‘salmon splitter’ for salmon smoking so naturally this area has always been his strongest and as they say ‘practice makes perfect’. If he could choose any fish species to prepare he would always choose salmon so it’s no wonder that this was his winning performance.

Working in a fast-paced environment like M&J Seafood has helped Paul to continuously improve and develop his skills as a fishmonger and he puts that down to working under pressure and maintaining attention to detail with each order. Working with previous winners, Dave Bennett and Gopal Nandy means there’s always banter and healthy competition in the filleting room.

To remain the best fishmonger in the country takes time and dedication and Paul hones his skills on a nightly basis. His advice to other fishmongers is to remain focused, keep working at it, and ultimately it all comes down to practice, so never give up.

Outside of M&J Seafood you will find Paul fishing in his spare time and he also enjoys other sports including tennis and rock climbing.

Paul has worked for M&J Seafood for 6 years and is based in our Smethwick branch.